To become an eligible Club in K9 Frisbee Toss & Fetch League, a minimum of 8 individual human disc doggers are required on a roster.  Clubs compete against other Clubs by scoring League points based on their Team’s ranking at the end of each five-week season. This is not changing. 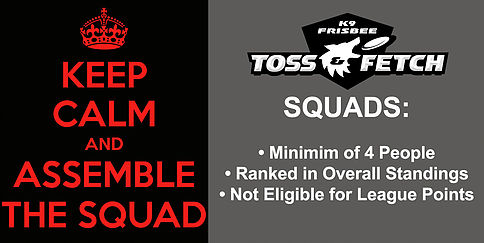 However, as a way to continue to expand the sport and give smaller, isolated communities throughout the world an opportunity to play in the Toss & Fetch League, we will now allow 4, 5, 6 and 7 member “Squads” to participate but in a different class with the following conditions:

According to Mark Vitullo, the League Administrator, Toss & Fetch League relies on the honor system for reporting local scores, and the 8-person minimum standard for Clubs is a way to inject an amount of peer review and oversight as well as a baseline number to help Clubs be competitive against one another. Additionally, Club Captains are vetted by either personal contact or recommendation.

“I’ve talked to a dozen or so people who would love to play in the League but they’re just unable to get to the 8 people minimum,” said Vitullo. “Opening up the League to Squads of less than 8 people diminishes some of these safeguards but still allows them to compete in a kind of “exhibition” status. They get to see how they’d rank as individual teams, but they’ll be skipped over when it comes time to award League Points,” he explained.

The $20 Squad surcharge and up-front Team payment through PayPal will help cover administrative costs for these smaller entities such as mailing awards to all Squad Captains and ranking teams throughout the Season. It will also guard against Squads that join the League but then drop off as the season progresses.

Whether you want your group to participate as a Club or Squad, there’s still time to join the Spring League that begins the week of April 15. You can do so by contacting Mark Vitullo via email at markvddcg@gmail.com or through the contact form at www.tossandfetch.com.