Whether you’re brand new to disc-dogging, an experienced world champion competitor or somewhere in between, in K9 Frisbee Toss & Fetch League everyone competes in the same overall rankings. At the end of each five-week Season, the top 40% of individual handler are awarded points for their Club.

In K9FT&F League, we’ve developed a handicap system to help everyone have a chance at that top 40% regardless of their experience or ability.

Now that we’ve got over a year’s worth of data over the course of Five League Seasons, we’ve been able to analyze scores as they pertain to handicaps and we’ve made adjustments to the guidelines for assigning a Handler’s Division level.

Except for Junior and brand new players, a Handler’s Division level can now be based on the ability of BOTH a Handler and their BEST dog to score points in two rounds of K9FT&F based on the chart below. 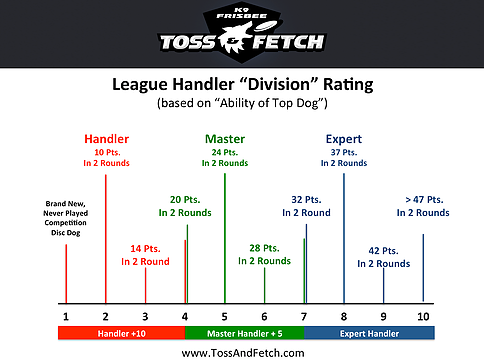 Based on this, the rules have been re-written per the following:

Before each League Season begins, Handlers will be assigned to a Division level based their and their best dog’s ability to score. Handlers are always encouraged to move up as they or their top dog improve. Handlers may also move down in Division level when appropriate. Handlers, Clubs and Captains are responsible for self-policing so as not to purposely achieve advantage.  That being said:

Anyone who’s played in at least one League Season has weekly scores they can look at to help guide them. Anyone who is brand new, can play as a Handler and then adjust based on their scores after they’ve got a season under their belt. If you’re still unsure, you’re Club Captain will help guide you.