Handlers can play with multiple dogs to form multiple Teams (handler & dog), but only ONE (1) Team per handler will score and count towards League Points -- the Team with the highest final point total for any Handler. All teams will be scored and tracked in the Standings.

To level the playing field so that all skill levels are competitive and have a chance to score Club Points, we award Handicap Points for each week played based on the Handler’s skill, ability and experience as follows:

Mulligan Rule: At the end of each five-week League Season, the lowest weekly score (plus any handicap points for that week) will be dropped to establish each Team’s Final Score & Final Standing.

The Final Team Standings will determine Final League Points earned for each Club. Teams that Rank in the top 40% of the Final Standings (based on the number of unique handlers) earn League Points for their Club.

For instance, if a League Season has 800 Handlers competing;

Clubs will be ranked based on the number of points their teams accrue with the highest scoring Club declared that League Season Champion. 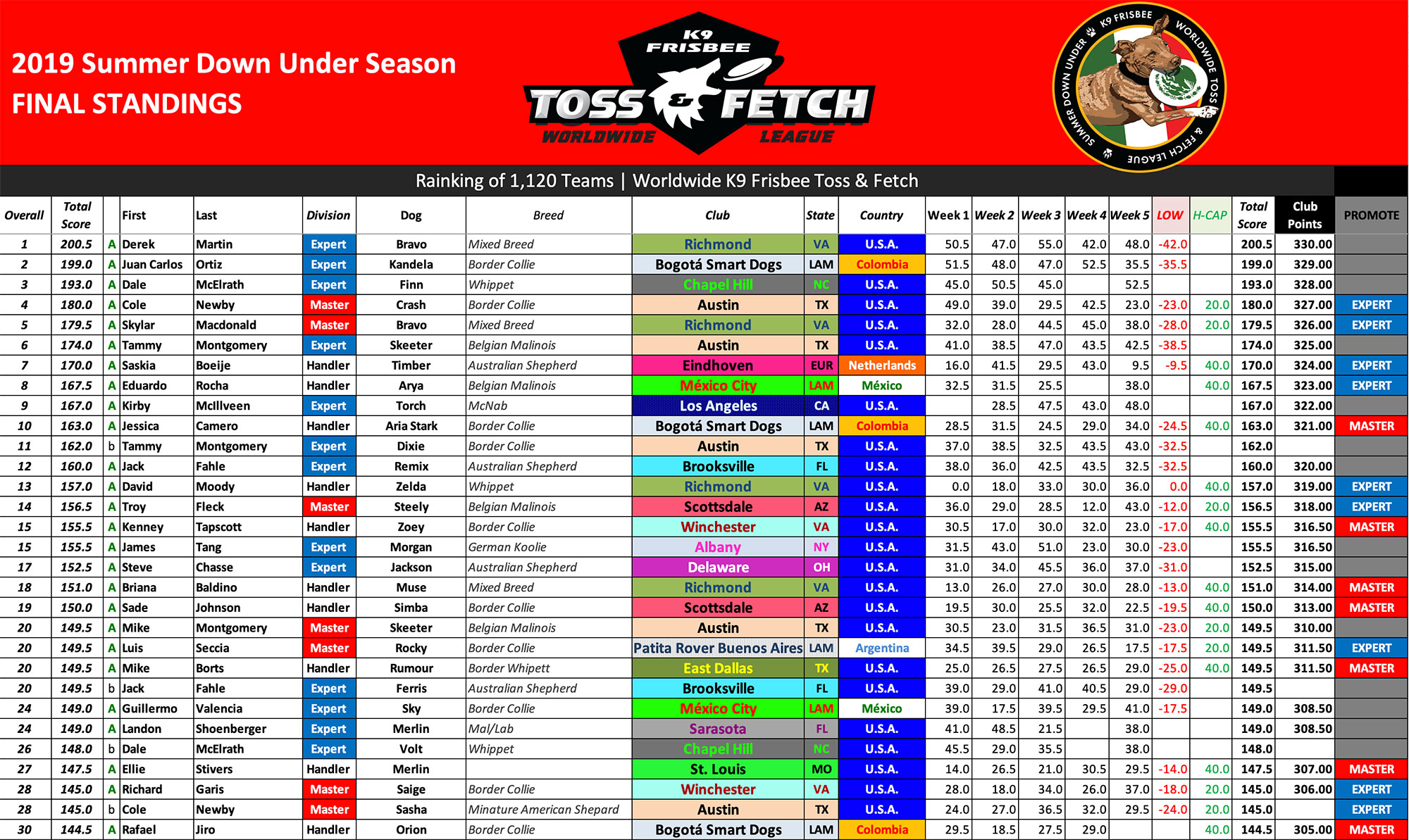 This is a sample, partial scoresheet and rankings after all five weeks are played. All Teams from across the League are ranked 1st to last based on their Total League Score which equals (Week 1 + Week 2 + Week 3 + Week 4 + Week 5 + Handicap - Lowest Week). Teams in the top 40% earn Club Points based on their ranking.

HOW TO FORM A TOSS & FETCH CLUB

Toss & Fetch League is open to disc dog clubs, organizations or any groups of 8 or more dog-loving friends, anywhere, who can get together on the same day each week to play two rounds of K9 Frisbee Toss & Fetch. To become part of the League, the following conditions must be met, along with a vetting by the League.

The League Fee for competitors playing in the United States of America to cover the administrative and insurance costs for an entire five week Season is $15.00 US for the first dog (Team) and $10 for any additional dogs (additional Teams). There is no limit to the number of Teams a Handler can enter.

There is no limit to the number of Teams a Handler can enter. Handlers pay fees to their Club Captains who make their payments by the 3rd Week of each Season.

CAN'T FIELD A CLUB? START WITH A SQUAD

As a way to allow smaller groups of less than 8 to enjoy the fun and excitement of K9 Frisbee Toss & Fetch League, and to hopefully grow into a full-fledged Club one day, come out and play as a “Squad”.

To form a Squad, you must have at least four people (4 unique individual humans) on your roster when a season begins. As always, each person (handler) can play with multiple dogs and dogs can be shared amongst multiple handlers to form multiple Teams, but it’s the number of individual people that you count to form a Squad or, if you get to 8 or more people, a Club.

“Squads” participate in a different class with the following conditions:

·       Squad member Teams (human and dog) WILL be ranked in the Overall Standings each week along with all the other Teams in the League.

·       Squad members, however, will NOT be eligible to score League Points – these will only be awarded to Club member teams

·       Squad members will each receive a commemorative, embroidered “Canis Felix” patch and will NOT be eligible for the “Canis Magnus” patch, which is only awarded to teams who score League Points.​​

Squad to Club: If, in the course of any Season, a Squad grows to 8 or more people by the 3rd Week, that Squad will be promoted to a Club retroactively to the beginning of the season, ranked amongst other Clubs, and Handlers with a Team that finishes in the top 40% of all Teams will be eligible for the “Canis Magnus” patch.

Each Club will have a Captain whose responsibilities include:

Clubs are comprised of multiple Teams who are ranked agains all the other Teams in all the other Clubs in each League Season. The top 40% of all Teams earn points for their Club.

Before each League Season begins, Handlers will be assigned to a Division level based their and their best dog's ability to score. Handlers are always encouraged to move up as they or their top dog improve. Handlers may also move down in Division level when appropriate. Handlers, Clubs and Captains are responsible for self-policing so as not to purposely achieve advantage.  That being said:

To level the playing field so that all skill levels are competitive and have the chance to score Team Points, we award Handicap Points for Intermediate and Novice players:

For guidance on setting a handler's division level, refer to the blog post: How To Determine "Division" Rating in K9 Frisbee Toss & Fetch League.

NOTE: If a Team misses a Week, they are not awarded handicaps points for that week.

League Weeks begin on the Saturday of each Week and end on Thursday so that all scores can be submitted no later than Friday, before the next Week begins.  Clubs can schedule their League play any day/evening except Friday so that weekly scores can be entered, tallied and published before the end of each week.

NOTE: It is possible to play weekly rounds on Friday's but requires permission in advance from the League. Friday play would begin the day BEFORE a season begins, which is always on a Saturday.

LEAGUE PLAY DAYS MUST BE PRE-SCHEDULED

Captains must schedule their League play days, time and field before each season begins and adhere to that schedule.

Clubs may pre-schedule multiple League weekly play days but they must be at the same field, for instance a Saturday and a Wednesday, however at least 4 actively playing Club members and a Club Captain or designated Co-Captain must be present at each League play day.

Playing in all types of weather is part of the game. Clubs may only re-schedule a League play day within the same week if inclement weather makes the regularly scheduled time unsafe to play or impractical to travel.

Rescheduling is only allowed with permission from the League Admin.

The object of K9 Frisbee Toss & Fetch is to complete as many catches as possible, in bounds and within the Scoring Zones in the time allotted.

Air Bonus: An additional ½ Point Air Bonus is awarded for each leaping, jumping catch, determined by all four paws off the ground at the time, and then landing in a scoring Zone.

Close calls go to the Team.

Junior Scoring (for all Handlers 13-years or younger):​

In an effort to reward success and encourage the little ones, in addition to the standard scoring zones (1, 2, 3 & 5), a catch in the 0 to 10 yard zone or anywhere out-of-bounds, will be awarded 1 Point, provided the throw was a good faith attempt to throw at least 10 yards. The “attempt” clause is added to avoid purposeful, short little tosses to rack up points.

Note: Short and out-of-bounds catches for Juniors do not qualify for an additional ½ point “air bonus.”

Beginning with Fall 2020 Season, Teams that throw “rollers” (i.e, rolling the disc across the grass) will now be allowed, scored, ranked and be eligible to earn Club Points.

A Team that opts to play under the ROLLER designation must do so for an entire season and will not collect any handicap points.

Handlers who play with multiple dogs may designate one or all of their dogs as ROLLER Teams. Non-roller Teams will earn the appropriate handicap points for their Division.

All other Toss & Fetch rules apply for ROLLER Teams, accept for the ability to earn ½-point “air” bonuses.

Have fun with your dog.

Any dog measuring 40 centimeters (15.75 inches) at the withers or LESS will qualify as a Tiny Dog (TD) in K9 Frisbee Toss & Fetch.

The “Withers” is the spot at the base of the neck where the shoulder blades meet on a dog.

To measure height, start at the top of the withers and run the tape down to the ground. The tape should be parallel to the front leg and perpendicular to the ground to get an accurate measurement.

To qualify, a Club Captain must measure a Tiny Dog each season and post the height, in centimeters, to their Club’s Roster in the Google Score Sheet.

In addition to any regular weekly Division Handicap a Team is entitled, a Tiny Dog will receive one (1) TD Bonus Point for every catch scored in a round. Consequently, the scoring zones for Tiny Dogs will be:

“Air Catches” with all four paws off the ground, will earn an additional ½ point.

While the Covid-19 pandemic disrupts life around the world, the League has made the following rules allowances to help Clubs play safe, maintain social distancing, and adhere to local health guidelines. The allowances will be in effect till otherwise noted.
1. CAPTAINS ARE IN CHARGE: As always, Captains are in charge of their local Clubs. In addition to what’s outlined below, they may implement any rules, restrictions, requirements they deem necessary to play with your local Club (i.e., wearing masks, hand sanitizers, restricting numbers of people on the field, etc.).2. SPACE OUT PLAYING TIME: In an effort to keep groups small, a Toss & Fetch Club’s members may play at different times and/or different days and/or different fields throughout a League week.NOTE: Teams can only play for their home Clubs when playing remotely. a. All scores would need to be submitted to the Club’s Captain or Co-Captain in time for submission to League by Thursday evening each week.3. STARTING LINE JUDGE IS NOT REQUIRED: For scores to be valid under our “Peer Oversight Honor System”, reduce the minimum number of people required to be present from 4 to 3 by eliminating the requirement to have a Line Judge present. One person throwing and two sideline judges will make it official.a. When there’s no Line Judge, Handlers can use their leashes, laying them down to mark the starting line as a better visual cue (this is actually a practice that everyone should start doing all the time on an unlined field).

REMOTE PLAY
In addition to allowing Clubs to break up into smaller groups throughout the week, remote play is also allowed as long as:

1. you have permission from your Club Captain and the League.

2. at least 3 active Club members are present for every round played

3. you can only play for your Home Club (no merging of multiple Clubs)