Reprinted from the July 3, 2017 issue of the Rome News-Tribune which was published online here: http://bit.ly/2siA85j

Jennifer Cullari picked up the disc her dog Gibson had just retrieved, snapped it behind her back causing him to run around her while she threw the disc downfield for him to retrieve again.

Gibson raced after the disc and just when it looked as if it would hit the ground before he could reach it he sped up and snatched it out of the air before running back to Cullari for another throw.

The official sport is K-9 Frisbee Toss & Fetch and it is slowly becoming more prominent in the U.S. as well as around the world as dog owners gather and play fetch with their furry friends. The Rome club, called the Rome Disc Dog Club, is only 9 months old and about 10-17 dogs participate per week, according to club founder Chris Mashburn.

The team itself just completed its second week of its third season on June 28, and is looking forward to three more weeks of competition.

But Mashburn said the club is a place for dog owners to come out and enjoy time with their dogs with no pressure.

He said the winning team does not get any sort of cash prizes so the groups don’t lose focus on why they are there. The $12 registration fee covers the five-week season and helps with small costs the league faces overall. 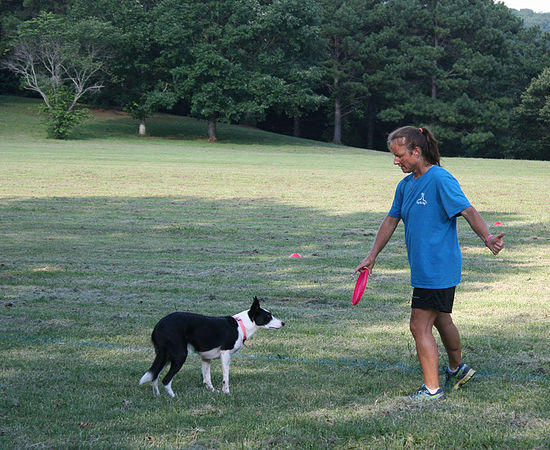 Shirley Rutledge and her border collie Jess line up and get ready to begin a game of Toss & fetch at a Rome Disc Dog Club competition on Wednesday, June 28, 2017.

The club is open to anyone who wishes to participate and beginners are just as welcome as experts. There is no specific type of dog that is required, but participants ranged from the popular high-energy border collie to German shepherds and even a deaf red heeler.

Despite the ranging levels of breeds and experience, the one consistency was the excitement of the dogs to compete.

Some dogs were chomping at the bit to get started and nearly drug their owners to the starting line barking excitedly. Some of the more seasoned fetchers brought the discs back immediately while others proudly trotted around the field showing off their caught disc to the owners.

When this happened, there were no boos or jeers from other teammates, just laughter and love for the dogs who saw it as a play date instead of a competition.

Others were so excited that they would outrun the disc that was thrown until on the second or third throw they caught on and began catching the disc.

Mashburn allowed his border collies to carry their discs proudly back to his vehicle as a reward for participating. At the end of the competition, owners and their dogs sat in the shade and drank water to cool off before packing up and going home. 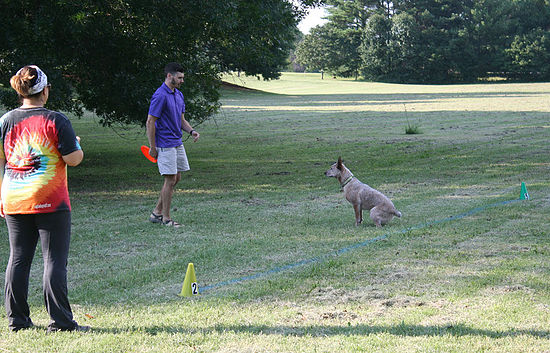 Greg Bevis warms up with his deaf red heeler Flynn who waits patiently for his owner’s hand signals. Jennifer Cullari keeps time for the pair during a Rome Disc Dog Club competition on Wednesday, June 28, 2017.

Club member Cullari explained how she trained her dogs which began with rolling the disc along the ground and let the dogs chase it to build the energy and desire needed for the toss and fetch program. Eventually, they moved up to complete tossing and fetching.

“They have to have the desire to do it at the end of the day,” she said.

Each owner and their dog stand at one end of a marked 50-yard field and have one minute to throw and return as many discs as possible. Each dog and owner get two rounds and then the final score is tallied and submitted to Ohio.

At the end of the five weeks, each team’s worst week is dropped and the team with the best score out of four weeks is declared the winner.

Teams from around the country send their scores in and are then ranked based on overall score. If the dog catches the disc in midair and extra half point is added to their score.

The team itself does not travel for competitions but experts like Mashburn, a resident of Silver Creek, travel to different competitions around the country.

He and his dog Mindy placed eighth in the world last year in the AWI world finals free style event in Kansas City. The pair had two minutes to show the judges their best tricks.

The Rome Disc Dog Club placed 17th during the first week of the summer season out of 28 other competing cities from around the country and a few from other countries such as Canada and Australia.

The club meets at Georgia Highlands College in a field near the Lakeview building parking lot. For more information on the sport or how to get involved contact Mashburn at 706-766-1933.